Discover the Beauty of The French Broad River

Are you interested in learning more about the French Broad River? If so you’ve come to the right place! On this page you’ll find plenty of helpful resources, information, and fun facts about the river.

We are so lucky to have this beautiful resource here in Western North Carolina. It has a rich history and means a lot to many different people. We hope you’ll find something to love as you explore this waterway!

If you have questions about the river or its watershed feel free to send us an email at information@riverlink.org

Take a look at access points, campsites, and other points of interest on the river. Don’t forget to check the water quality before you go!

We advise against getting on the river when streamflow/discharge is above 3000 cubic feet per second. 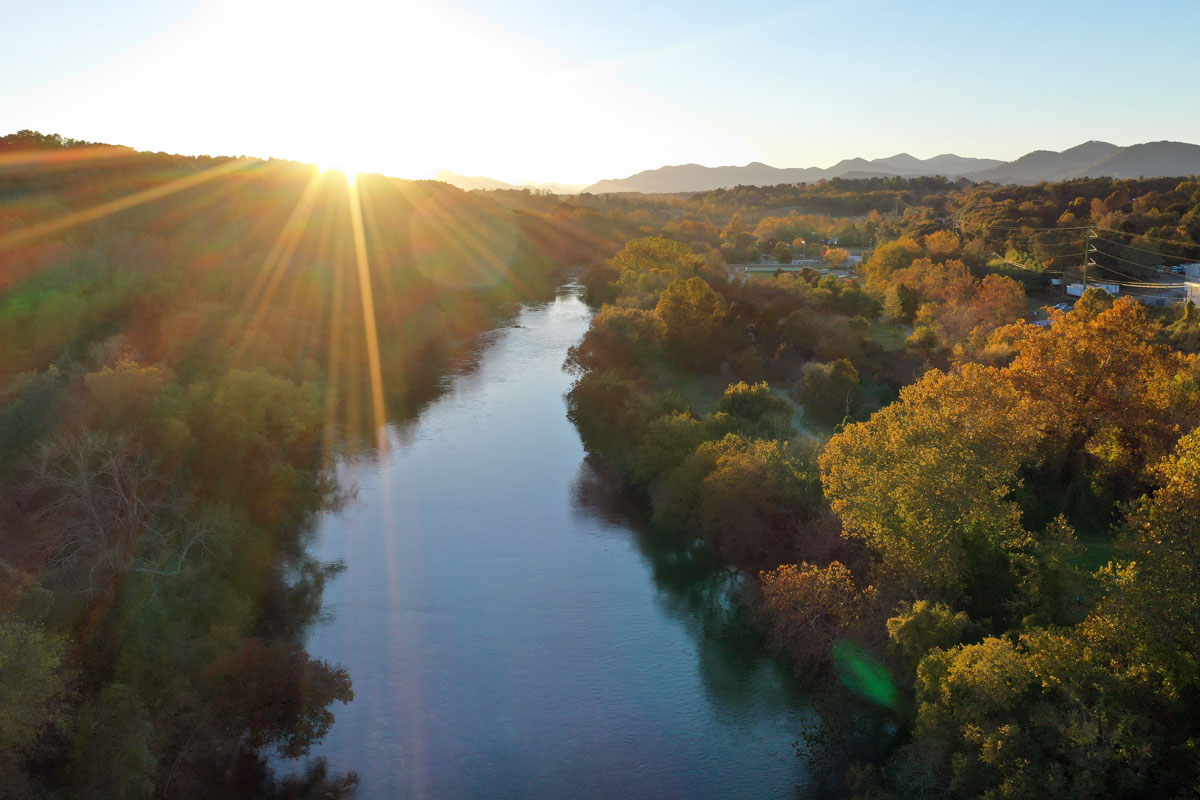 Although environmentally threatened for most of the 20th century, The French Broad River has become a vital economic, natural, and recreational resource.

Find out what RiverLink is doing to protect the river

Who can help me get on the river?

Check out some of our favorite river outfitters, tubing and rafting companies. They’ll make sure you have a fun, safe, and memorable experience on the river!

A Quick History of the French Broad River

The French Broad River is formed by the junction of the North Fork and West Fork in southern Transylvania County near the town of Rosman. It flows northeast into Henderson County, where it then turns northwest and courses through Buncombe and Madison Counties. The French Broad flows through the city of Asheville, where it picks up the Swannanoa River and continues north into Tennessee. After leaving North Carolina, the French Broad proceeds west for 102 miles, joins the Holston River to form the Tennessee River near the city of Knoxville, and eventually flows into the Mississippi River.

The Cherokee names for the French Broad River vary, but the most common was Tah-kee-os-tee, meaning ‘‘racing waters’’ since many Cherokee would race canoes on this river. Others, such as Peo-li-co, Agiqua, and Zillicoah, usually referred to only a part of the river. The English originally knew it as the Broad River—the way it was written on a 1766 map of Indian Nations. By 1776, however, the word ‘‘French’’ had been added because much of the territory west of the Blue Ridge, where the river drained, was occupied by the French in the 1700s.

At the start of the 20th century the river had become a hub for industry and trading. One of the most notable trade routs along the river was the Buncombe Turnpike, which helped rural residents bring livestock to town for auction. In 1916 the river experienced a massive flood so rare that they call it a 100 year flood. the waters of this natural disaster reached far up into, what is now the River Arts District of Asheville. As the years went on all of the industry along the river banks began to really show its impact. Before the recent tourism boom of Asheville, it was often said that you could smell the river before you could see it.

Luckily, RiverLink and many other organizations began to realize how important this waterway is. Since the mid 1990’s, much work has been done to restore the river banks, improve the river’s water quality, and promote the river as a recreational hub. There’s still much work to do, but thanks to the many passionate river goers we can continue to protect and preserve this river for years to come.

Native Wildlife on the River

All species profiles are sourced from the North Carolina Wildlife Resource Commission.