RiverLink is delighted to be a strategic partner in the Woodfin Greenway & Blueway project and to share the necessary funding has been achieved. This ambitious $29.9 million project includes the construction of five miles of greenway along the French Broad River and Beaverdam Creek. The project will also provide new river access sites and the recently opened Silver-Line Park as well as expansion of existing Riverside Park, all in Woodfin. An exciting and much anticipated feature of the project will be the creation of the in-stream Wave feature for whitewater paddling and surfing enthusiasts.

The planned greenway trails will connect to the larger greenway system being developed in the City of Asheville and beyond, promising a network of more than 25 miles of safe urban paths centering on the French Broad River. The project is being designed and built by the Town of Woodfin, with Buncombe County government supporting the effort with design and construction of the greenway elements of the project.

A tremendous amount of gratitude to all the funders that have made this ambitious project possible. The WGB project has received significant financial support from the Buncombe County Tourism Development Authority, the Federal Highway Administration (via NC Department of Transportation), Buncombe County, the NC Departments of Environmental Quality and Parks & Recreation, and private donors including the Silver family. In 2016, voters in the Town of Woodfin overwhelmingly approved a referendum for $4.5 million in general obligation bonds to support construction. 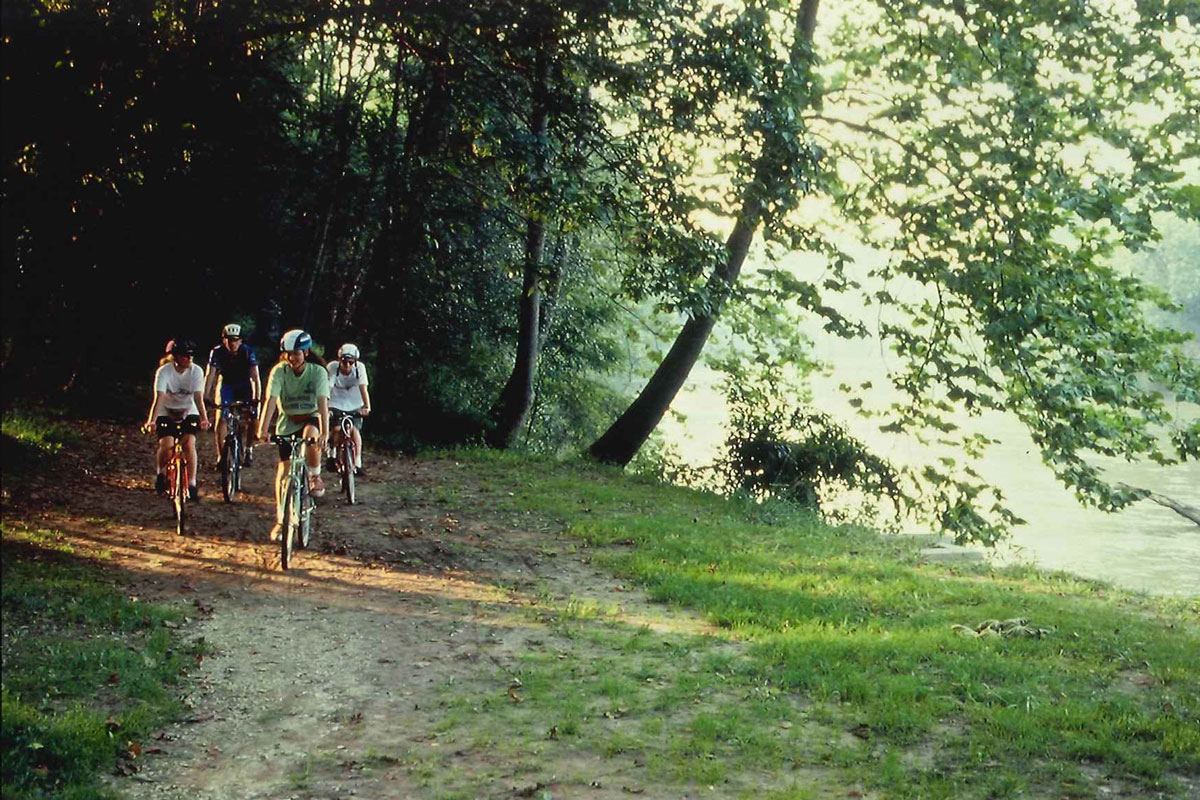 The Town of Woodfin’s 5 miles of 10-foot greenway trails will be part of a larger urban trail network that will extend through Asheville and beyond. Beginning at Woodfin’s southern town limit near the intersection of Broadway and Riverside Drive, the French Broad River section will follow the river north to the point where Beaverdam Creek enters the French Broad near the Mill at Riverside. The relatively short Beaverdam Creek section will follow the Creek upstream through its delightfully wooded and secluded gorge to come out near Merrimon Ave at the base of Reynolds Mountain. Over much of the route the greenways will parallel the path of the Craggy Mountain Line excursion railway. The French Broad section of greenway will trace the route of the historic Drovers’ Road, the busy transportation path that connected east Tennessee to South Carolina and preceded the railway era in Buncombe County.

Buncombe County government, on behalf of the Town of Woodfin pursuant to a memorandum of agreement November 17, 2017. The Town has responsibility for post-project operations and maintenance. 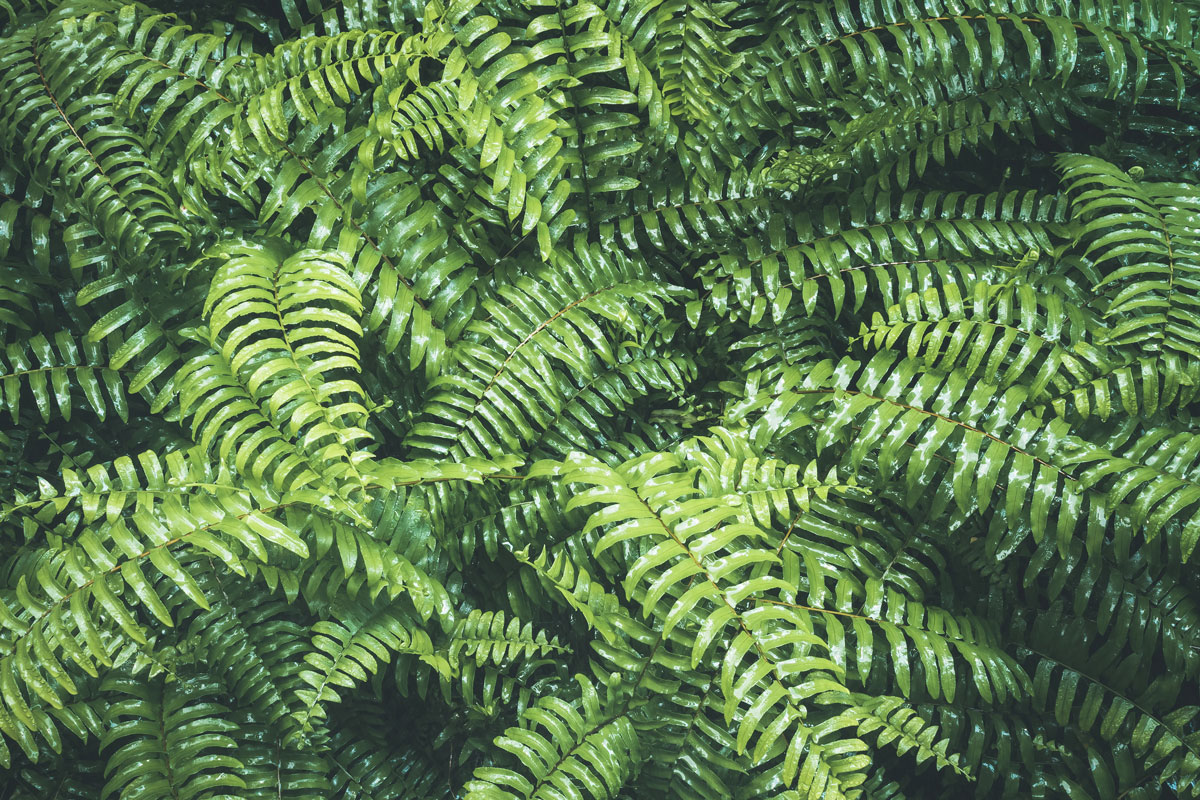 The new Silver-Line Park was built on a 4.5-acre site donated to the Town of Woodfin in 2012 by the Silver family, founders of Silver-Line Plastics. The Park provides a wide variety of opportunities including access to the river for recreational purposes, a children’s playground, and a connection with the Craggy Mountain Rail Line. Amenities include a trailer-ready boat ramp for river access, generous parking, picnic areas, riverbank restoration, a children’s playground, natural and constructed wetlands, public restrooms and walking trails. The park officially opened April 2022.

The cost for this park was $3.2 million with secured funding originating from: the Town of Woodfin bond that voters authorized in 2016, the Buncombe County Tourism Development Authority’s Tourism Development Product Fund, and private grants from the Pigeon River Fund and the Cannon Foundation.

The Town of Woodfin led the construction of Silver-Line Park.

Construction on Silver-Line Park began in September 2020, and then a ribbon-cutting ceremony in April 2022. 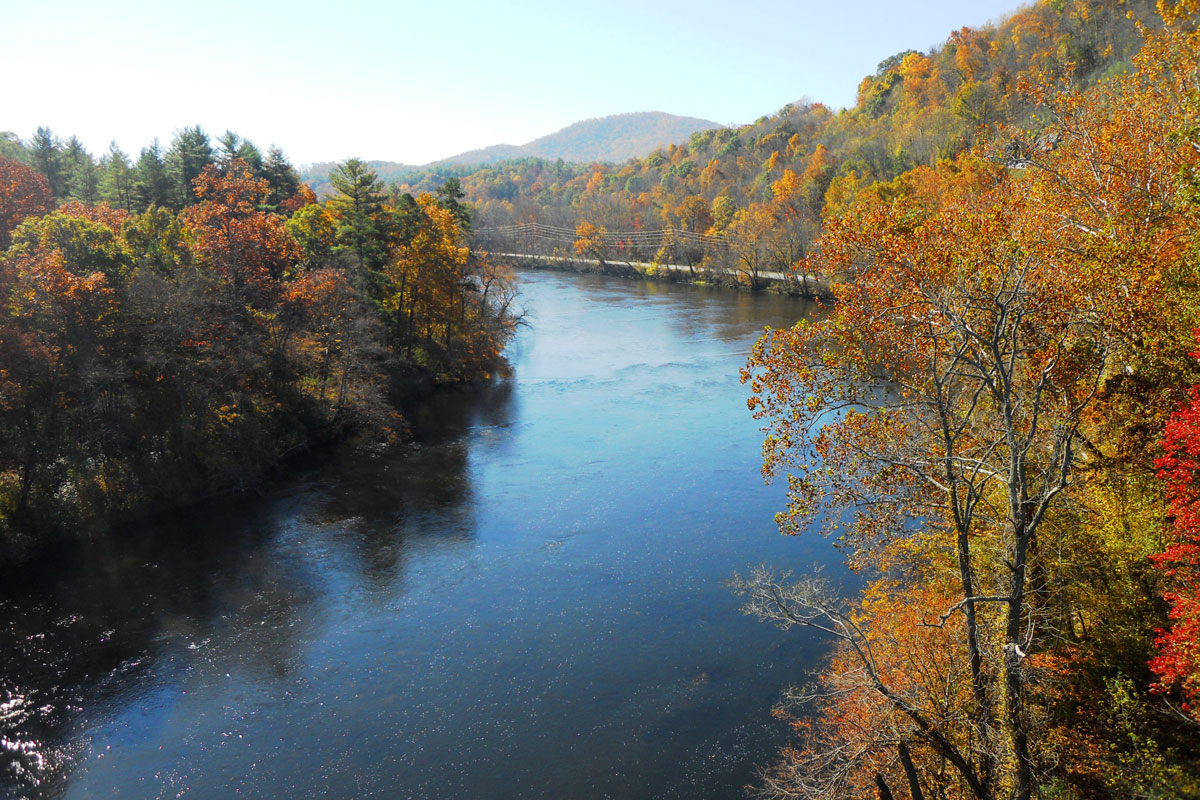 Riverside Park was originally built in 1998 after the 4-acre site was donated to the Town of Woodfin for that purpose. The Town of Woodfin will expand the current Riverside Park southward by almost 4 additional acres. Riverside Park is one of the most-loved places for recreation in Woodfin, and the expansion doubles the size of the existing area. This move will mean a generous park expansion, including changing rooms and restrooms, an overlook pavilion, and a spectator area to observe action on the Wave; in addition to much better siting for the greenway and Wave, greatly expanded parking, and a seriously needed environmental restoration. A new river access ramp will also be included.

The Master Plan for the expanded park is completed, and the Town purchased the former Waste Pro property adjacent to the existing park in July 2020. This additional land is critical to provide the access and supportive facilities for the Wave, which will be adjacent to the park. Following an extensive public engagement process that netted approximately 700 respondents, design for Riverside Park (led by Equinox) has passed the 30% design milestone.

The cost estimate for this project is $7.2 Million. Funding for this project originates from: the Town of Woodfin bonds voters authorized in 2016, Buncombe County Tourism Authority’s Tourism Product Development Fund, and donors and supporters through RiverLink.

Town of Woodfin is overseeing the design and construction of Riverside Park.

The Town of Woodfin has approved the Riverside Park Master Plan and 30% design, as proposed by local landscape architecture firm Equinox Environmental. Design for the park has paralleled that of the Wave due to the dependencies between these 2 recreational assets.

The basic sequential timeline for the Riverside Park project is as follows: 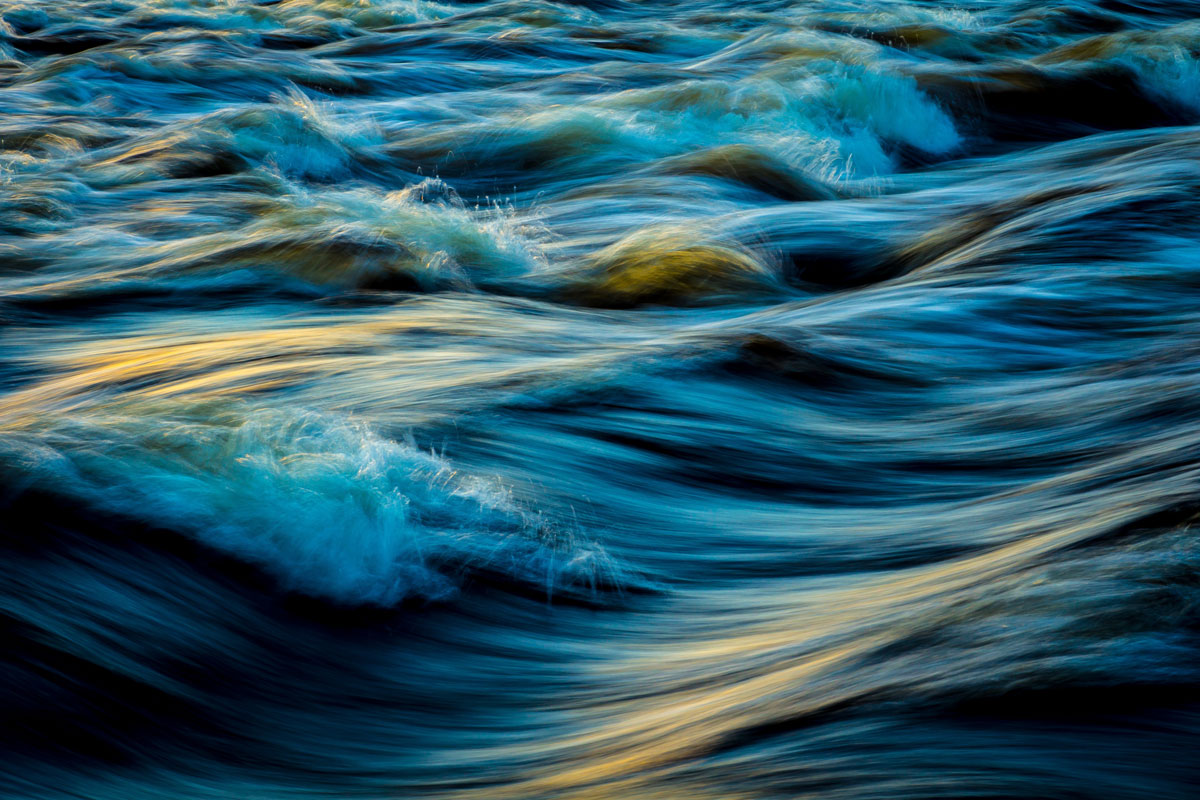 The Whitewater Wave will be a world-class river wave – perfect for a broad range of kayakers and surfers with intermediate to advanced skills. It will be created from a carefully designed and engineered ledge feature, made of natural rock and concrete, that is installed in the riverbed.  A preliminary design and feasibility study was completed for the Wave project in the fall of 2016, and can be viewed here. This conceptual document was supplemented in 2017 by a hydraulic analysis, which may be viewed here. The project’s design consultant, S2o Design and Engineering, indicates that the Whitewater Wave could be very similar to the Camphill Surf Park they designed on the Hawea River in New Zealand. The Wave will be sited adjacent to Riverside Park and the new greenway, in the Town of Woodfin.

In August 2022, the WGB Team traveled to Prague, Czech Republic, where the Wave reached a significant design milestone. A physical model of the in-stream rock structure confirmed that the project will deliver an environmentally sensitive, world-class wave for recreational and freestyle kayakers. The design also ensures safe passage for fish, wildlife and  river users who prefer to bypass the feature. The wave will be constructed simultaneously with an expanded Riverside Park, currently slated for construction beginning in summer of 2023.

As a subcontractor working with local landscape architecture firm Equinox Environmental, S20 Design and Engineering brings their substantial experience to Woodfin for design of the Wave.

The estimated cost for The Wave is $2.9 million. Funds for it originate from the Town of Woodfin bonds that voters authorized in 2016, Friends of the Woodfin Greenway and Blueway, Buncombe County Tourism Authority’s Tourism Product Development Fund and generous donations from private parties.

Town of Woodfin is overseeing the design and construction of the Wave.

Donate to The Project

We are delighted to report as of September 2022, Woodfin Greenway & Blueway is full steam ahead with current projected funding needs currently covered. However, like all major capital projects, we are assuming additional financial needs will arise as we embark on the construction of the Wave and the Riverside Park expansion next year and there will be a need and desire for additional supporting amenities.

We would be grateful for your ongoing support in ensuring a world-class Wave and recreational experience. And any funds received will continue to be restricted to their designated use as requested by the donor.